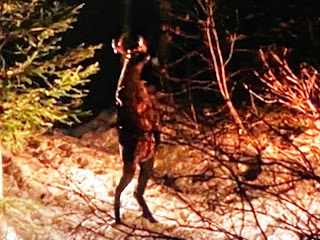 You know, I will never understand movies that have a good plot, are well written (kinda), well acted (kinda), well conceived, and even produced well on a low budget, but then they just end. It's almost like they have some kind of notion that if we just end it suddenly, it's some how "artsy" or something. There's nothing arty or dramatic about movies that just end. It's just stupid. It doesn't leave some kind of aura of deep thought in the viewers head, it just makes them angry and not enjoy the movie.

I saw Black Mountain Side on Prime and thought it looked promising. I was surprised that I had not heard of it before since it seems like the type of movie I watch a lot - I'm a big fan of "The Thing" (1982). So, I can only give it up to the Amazon matrix on why I haven't seen it before. Perhaps the budget wasn't there to promote it properly, who knows.

I watch a lot of movies with an ending always playing around in my head and I usually get pretty close by the time the credits roll. Not with this one. Well, I was close but then they seemed to just pull the plug. Maybe they ran out of money? Please, next time, do us all a favor and wrap things up nicely. Even if you are planning some kind of sequel, it's just common courtesy to at least give us a fade away.

The movie starts a little slow but very similar to The Thing with the isolation and cold but with a nice twist. It makes you start to think about nature, history, even cosmic or otherworldly. There is some good well thought out background on native cultures and anthropological groundwork laid out. Then things get gritty in a sort of Lovecraftian Native American sort of way and you start taking sides and cheering for different people. Then it ends. There is no final thought, explanation, wrap up scene, nothing. Not even an eerie fade away.